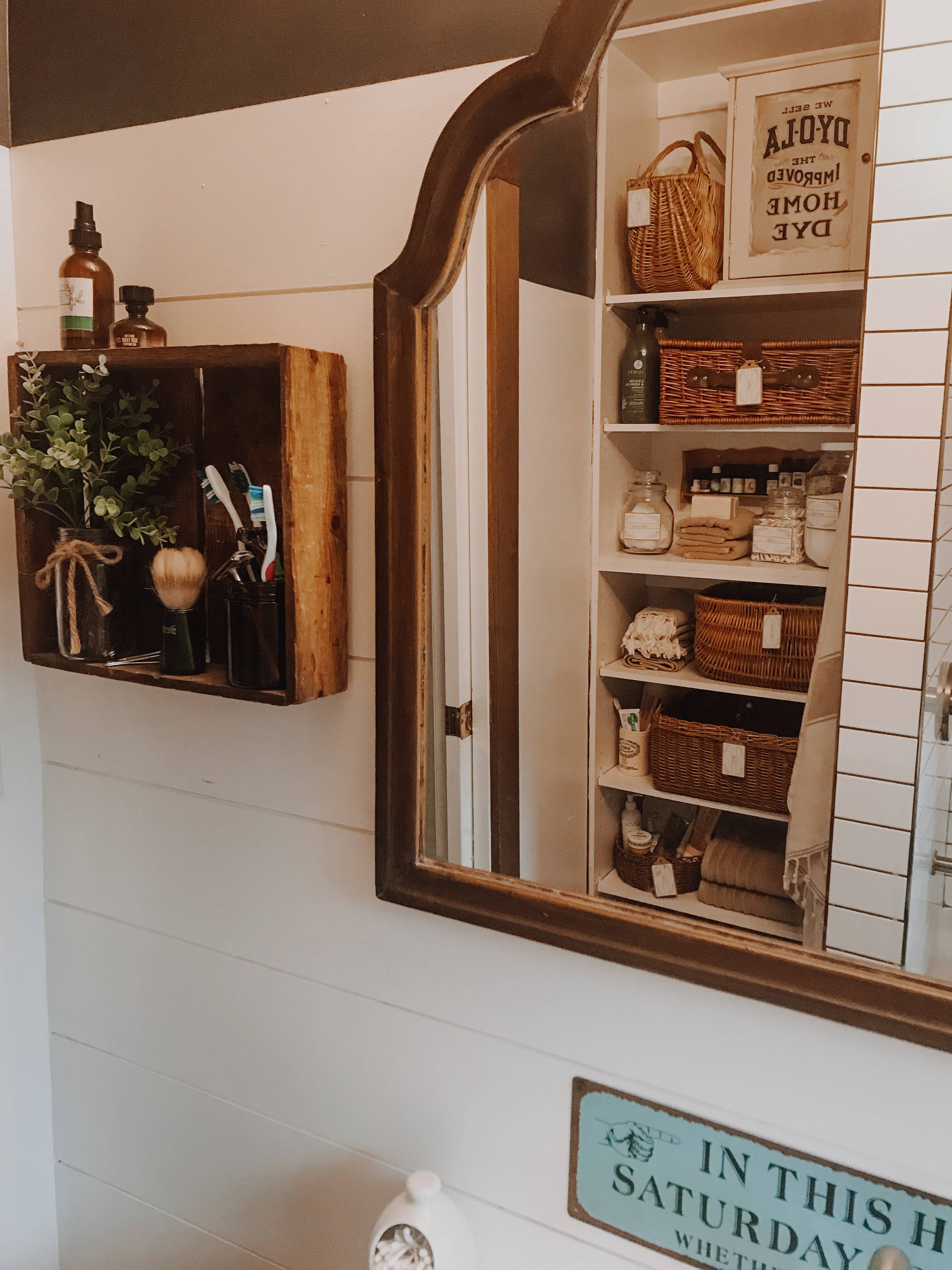 During the summer months things get so busy that the house can get really disorganized. Coming and going often and more time spent outside can really put you behind in keeping the house in order.  Before you know it you have a lot of clutter and for me that means a cluttered mind as well. 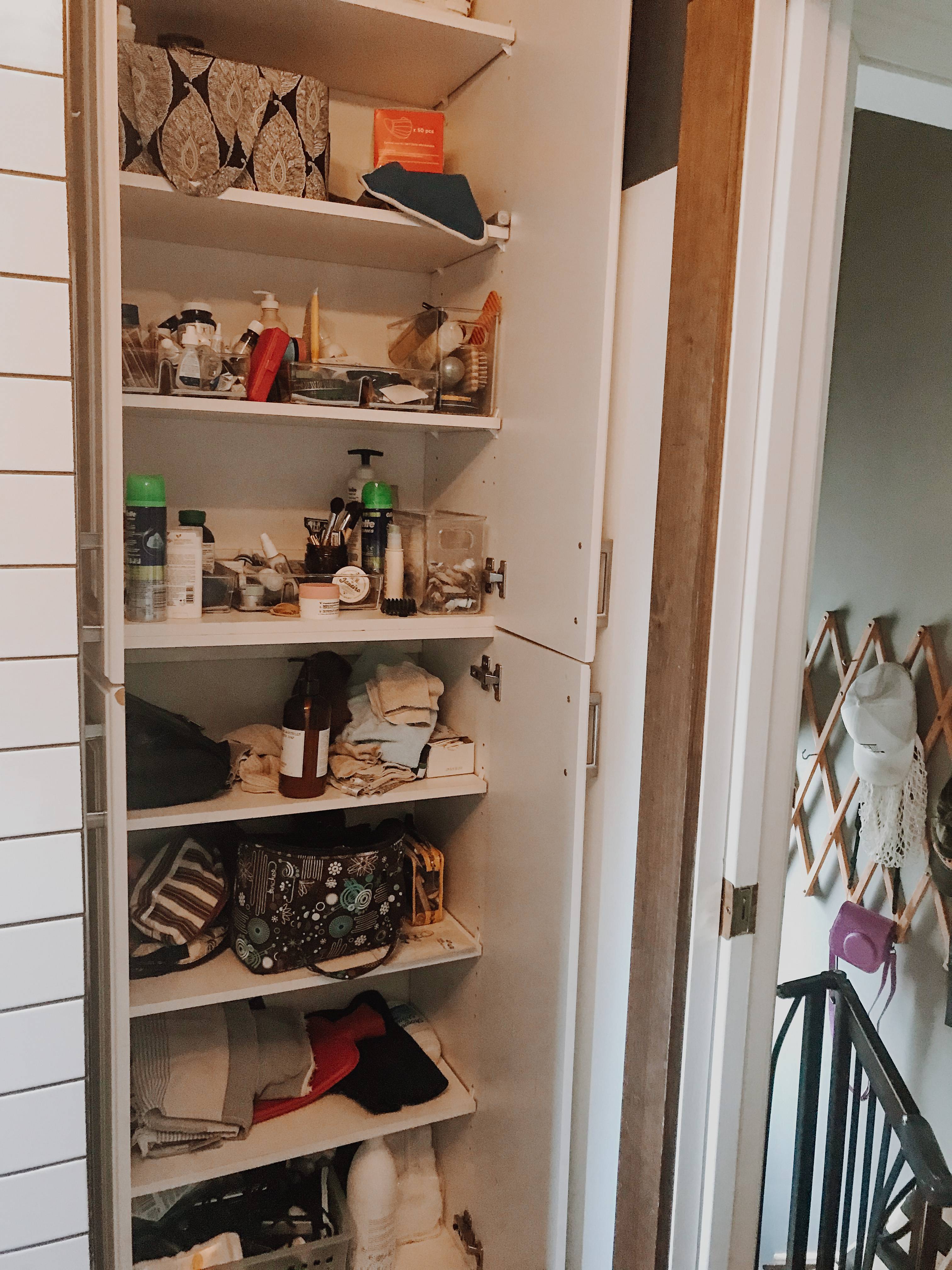 My bathroom cupboard has been bothering me for quite a while and I just had to do something about it.  As you can see it was a disaster.  No rhyme or reason to the items kept there, just scattered about.  I not only wanted to organize the shelves and make it more practical but I wanted it to look appealing to "my eye" and for similar items to have a home you could say.  A labelled place so everyone knew where to put things so it could stay looking orderly.

I started by taking everything out and wiping down all the shelves.  This in itself can be quite overwhelming because it resulted, at least for me, in a ton of stuff all over the kitchen counters and island.  This is inevitable though and I feel like sometimes you can not get order without first creating some disorder.  It is a process and I just have to keep telling myself, "the mess I have just made is part of the process, it wont be like this for too long".

I like to see everything I am working with and separate items into groups that make sense to me.  This way I can also see what needs to be thrown out or donated.  I really was determined not to spend too much on this project so I allowed only $40 total.  This is a fun challenge, to see what you can come up with.  What do you already have that you can use and what do you really "need" to finish off the space?

I looked all around my house and found a number of baskets that were not being used and some others that were being used but the items in them could be stored elsewhere.  Here is my round up of baskets. 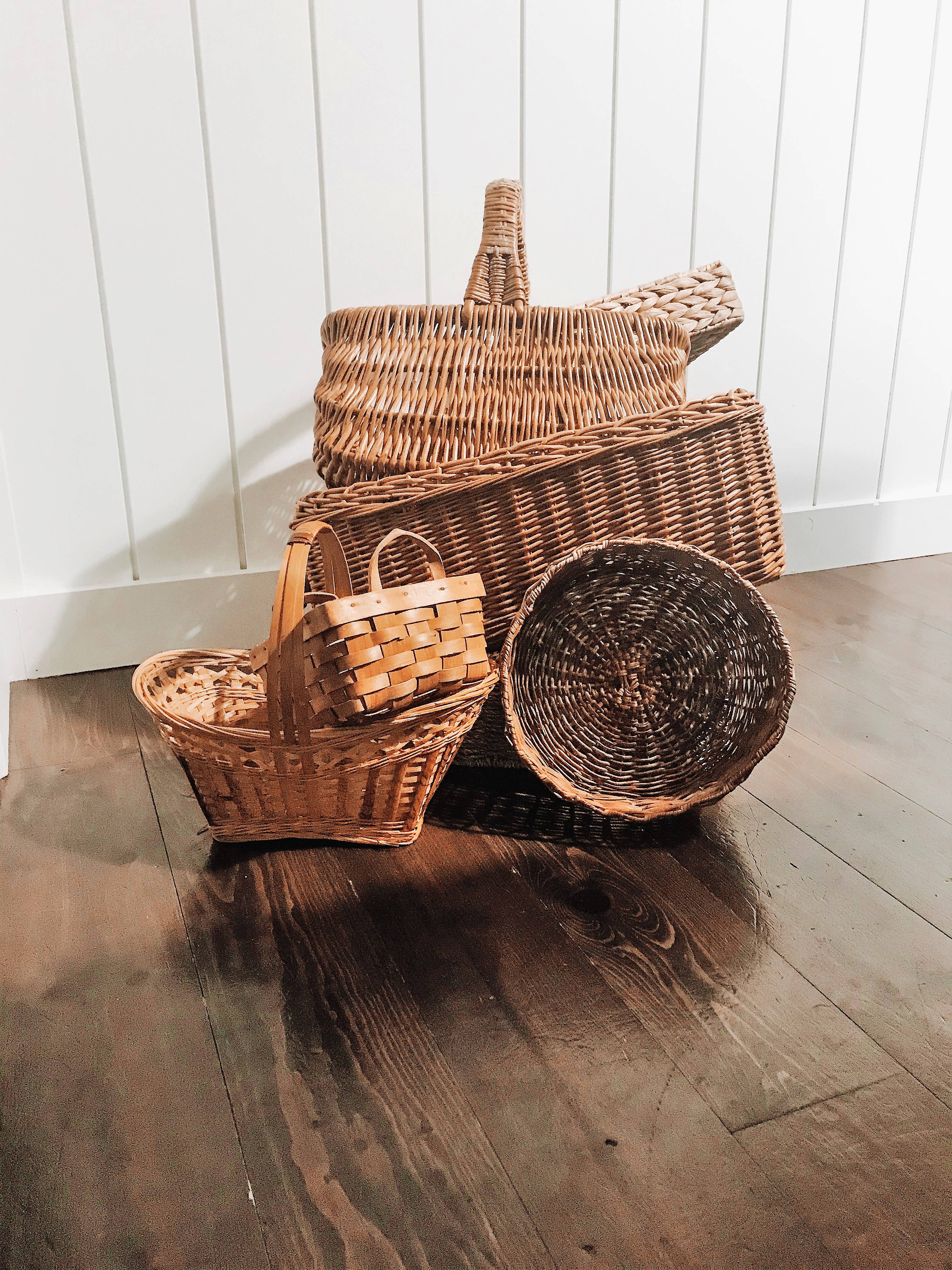 As you can see I tried to keep the baskets all in the same tone of finish.  I was hoping this would make the overall look of the cupboard or shelves more visually attractive.

Next I put everything that was similar into groups.  For example all the medicines and vitamins were grouped together.  As were all creams and first aid supplies etc.  I used a small cabinet that I was previously using in the kitchen as a place to now house all our medicines. 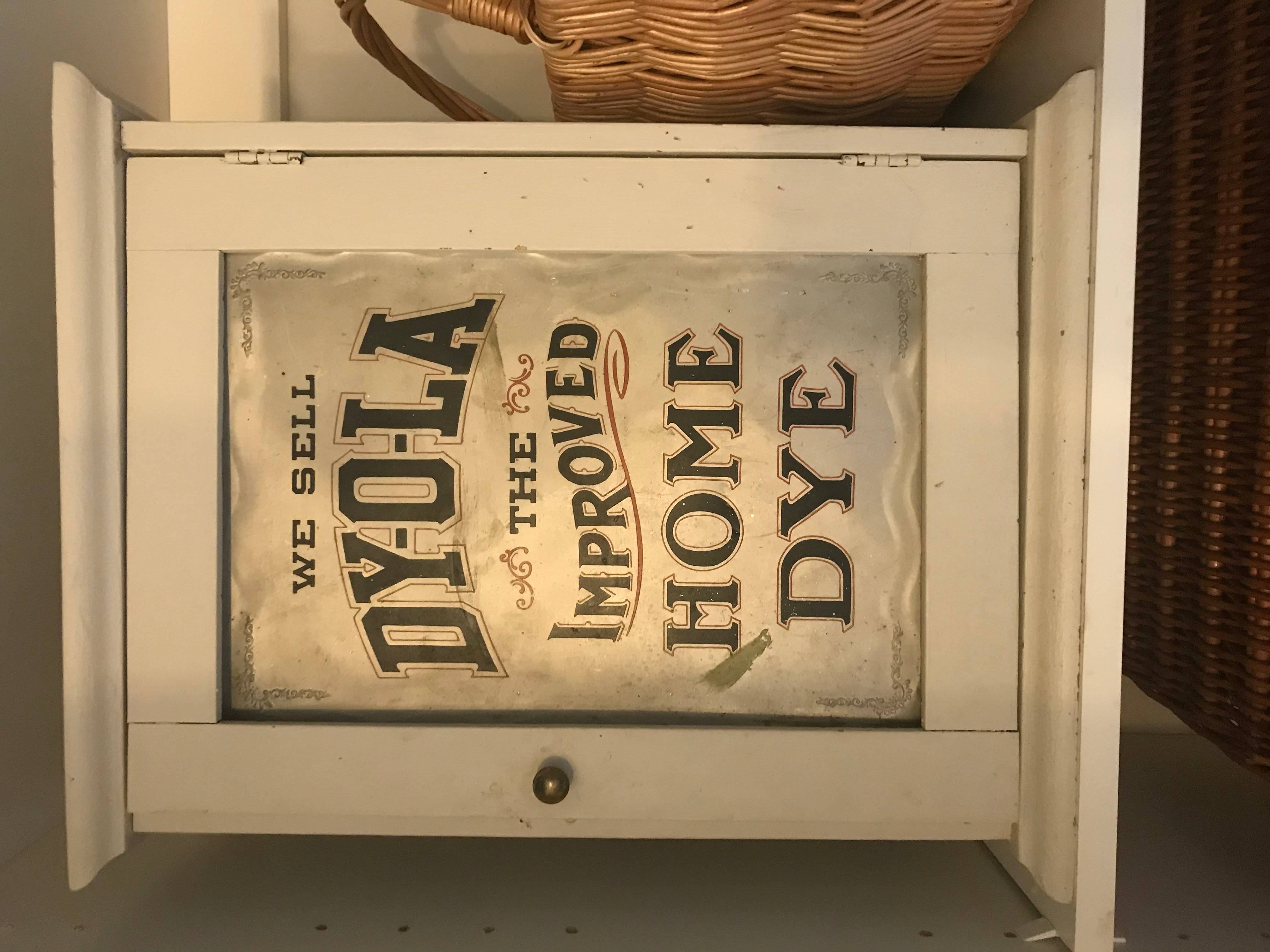 Don't shy away from using something for a new purpose if it will serve you better and saves you from spending more money on something that just is not necessary.  I put this on the highest shelf, which I lowered and this will keep it out of reach from my 3 year old daughter.  I played around with the setup and layout until I was happy with it.  I wanted most of the things that were previously just left out and scattered on the shelves to now be in labelled baskets, leaving only a few things on display like my essential oils, Epsom salt, cotton swabs and toothbrushes/toothpaste. 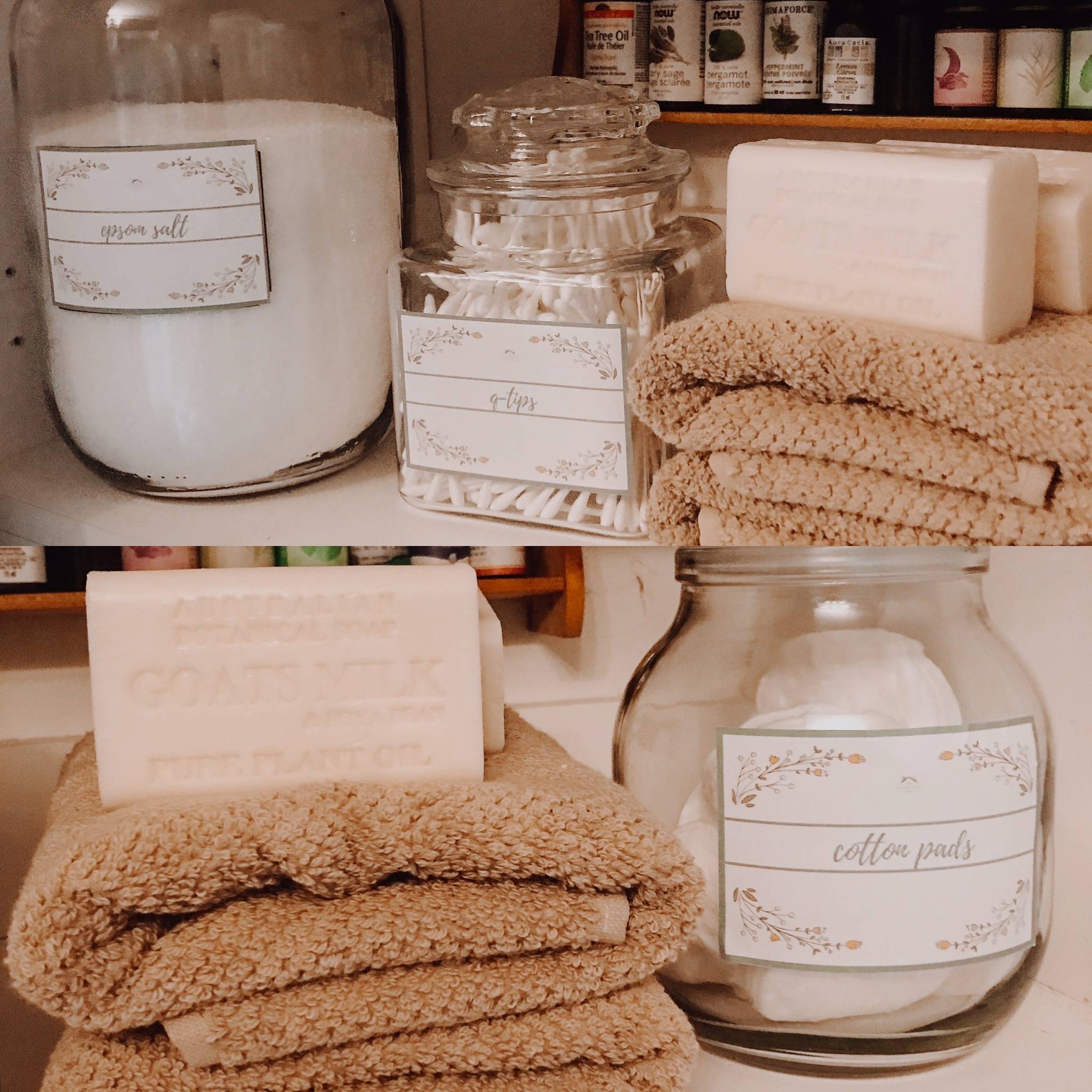 I clearly labelled the baskets so that everyone would know what was in them without even looking.  This also looks pretty and was my subtle hint to my family of where things belong and that they should return there after they are used. 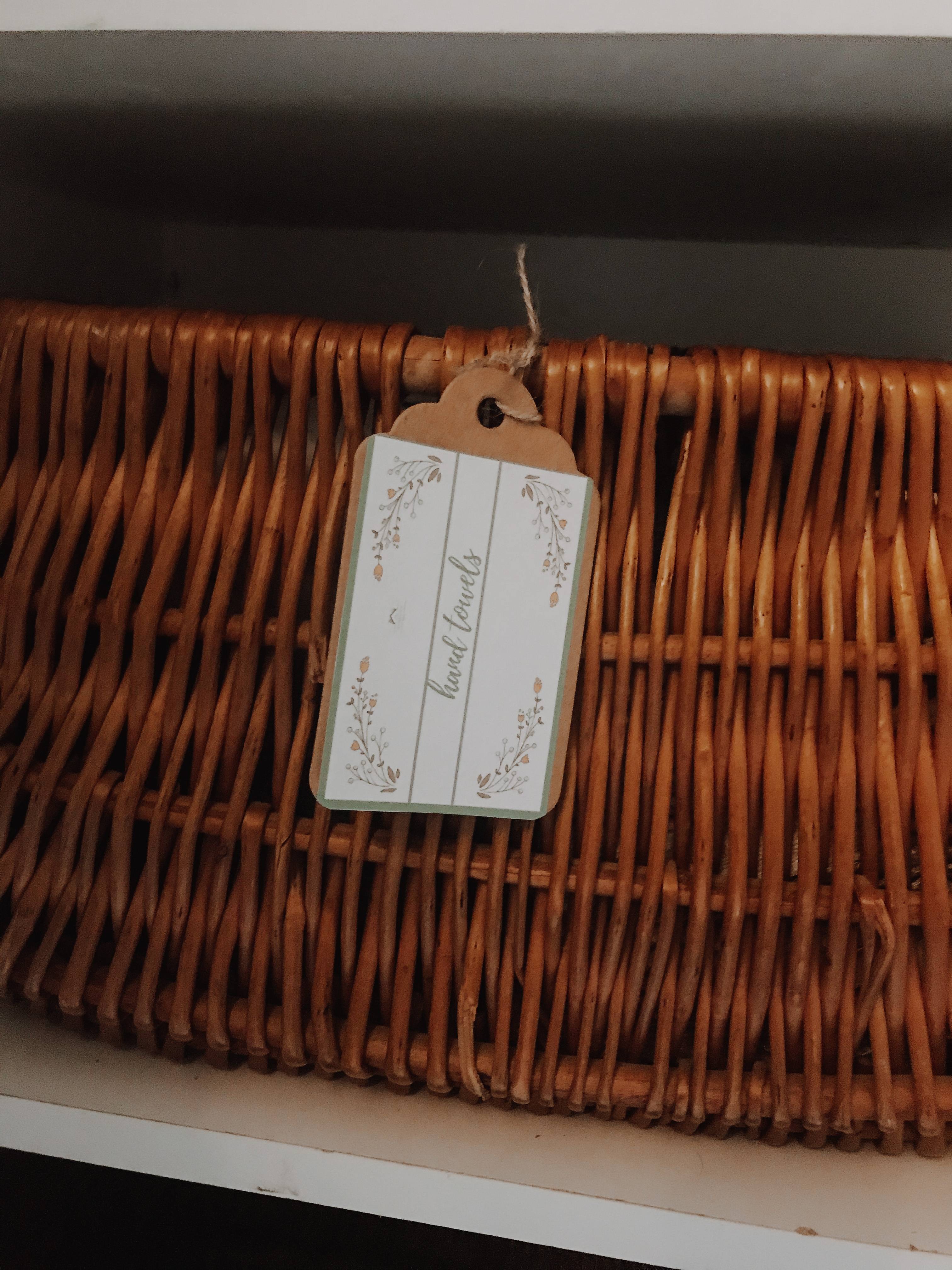 In the end I decided to take the doors off the cupboard.  This gives the bathroom a different look, feels more open and forces me to keep it organized as it is always visible.

In total I purchased one large basket from the thrift store for $5, one picnic type basket for $12, two glass jars with lids for $4 and some tags which I added custom labels for $2.  This was $17 under my set budget, which I think is really good.  I did also buy some bath and hand towels but I did not include this in the total cost as it really had nothing to do with the organization of the cupboard.

Here is the final look 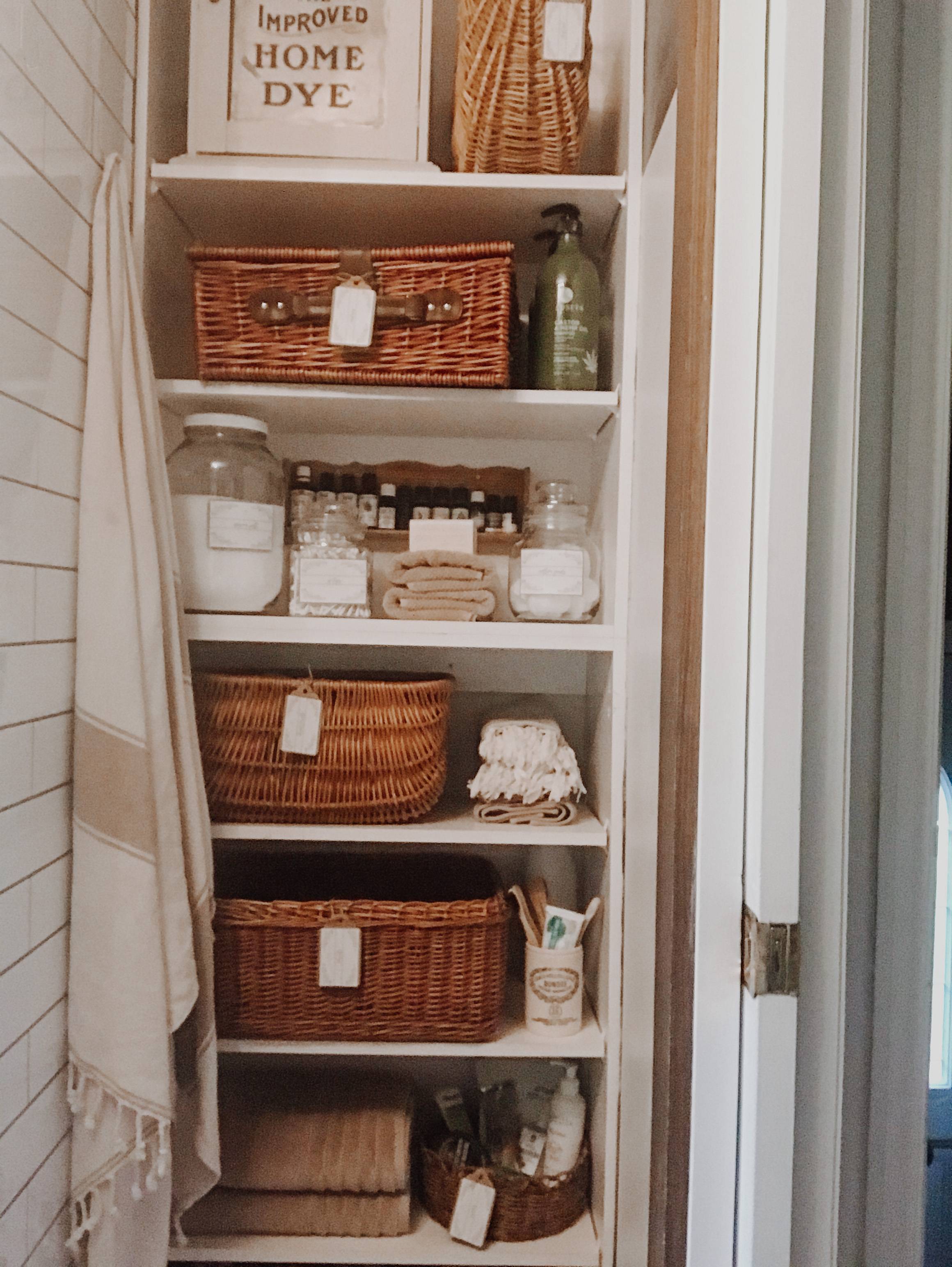 And here are a few details 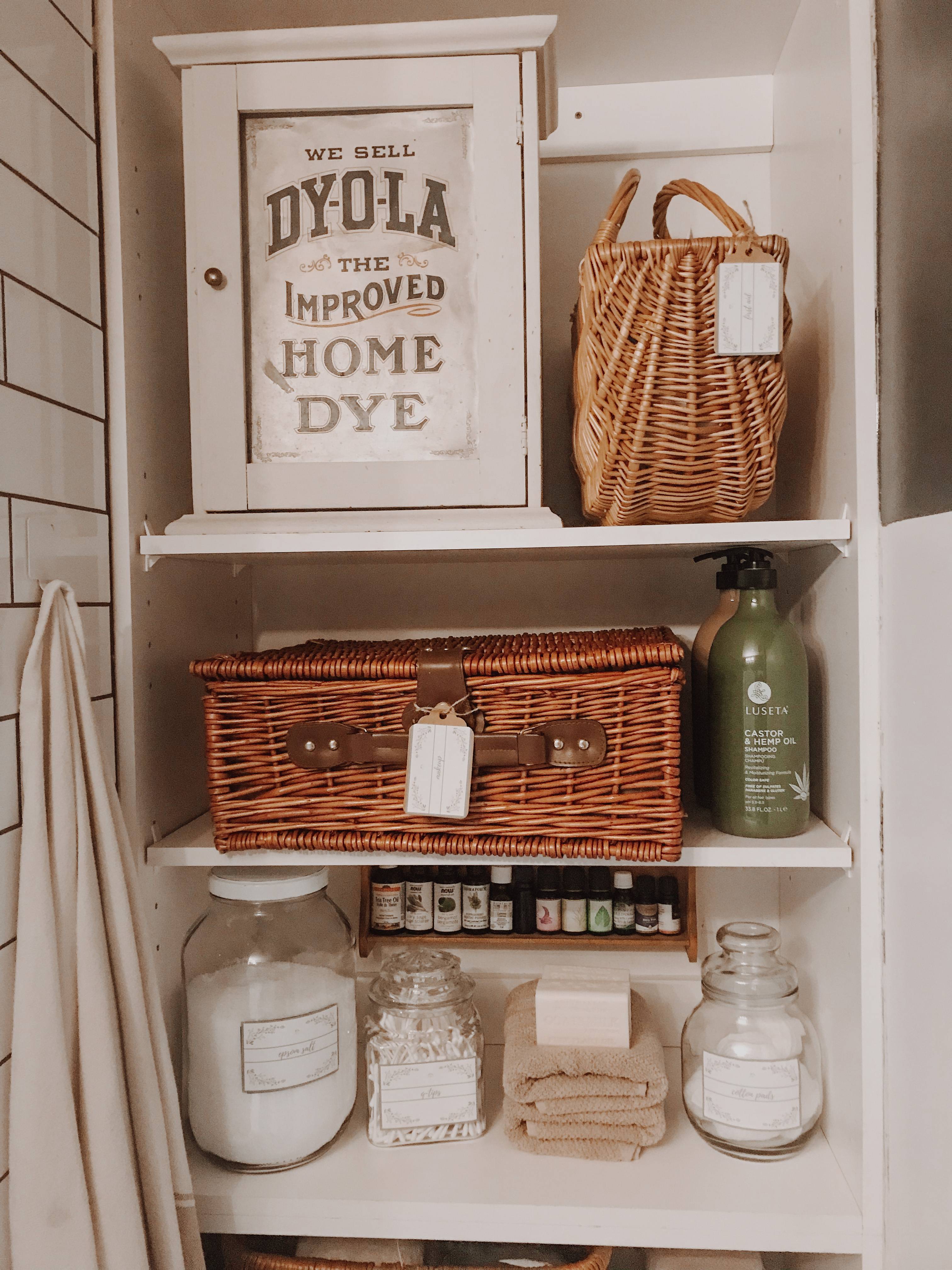 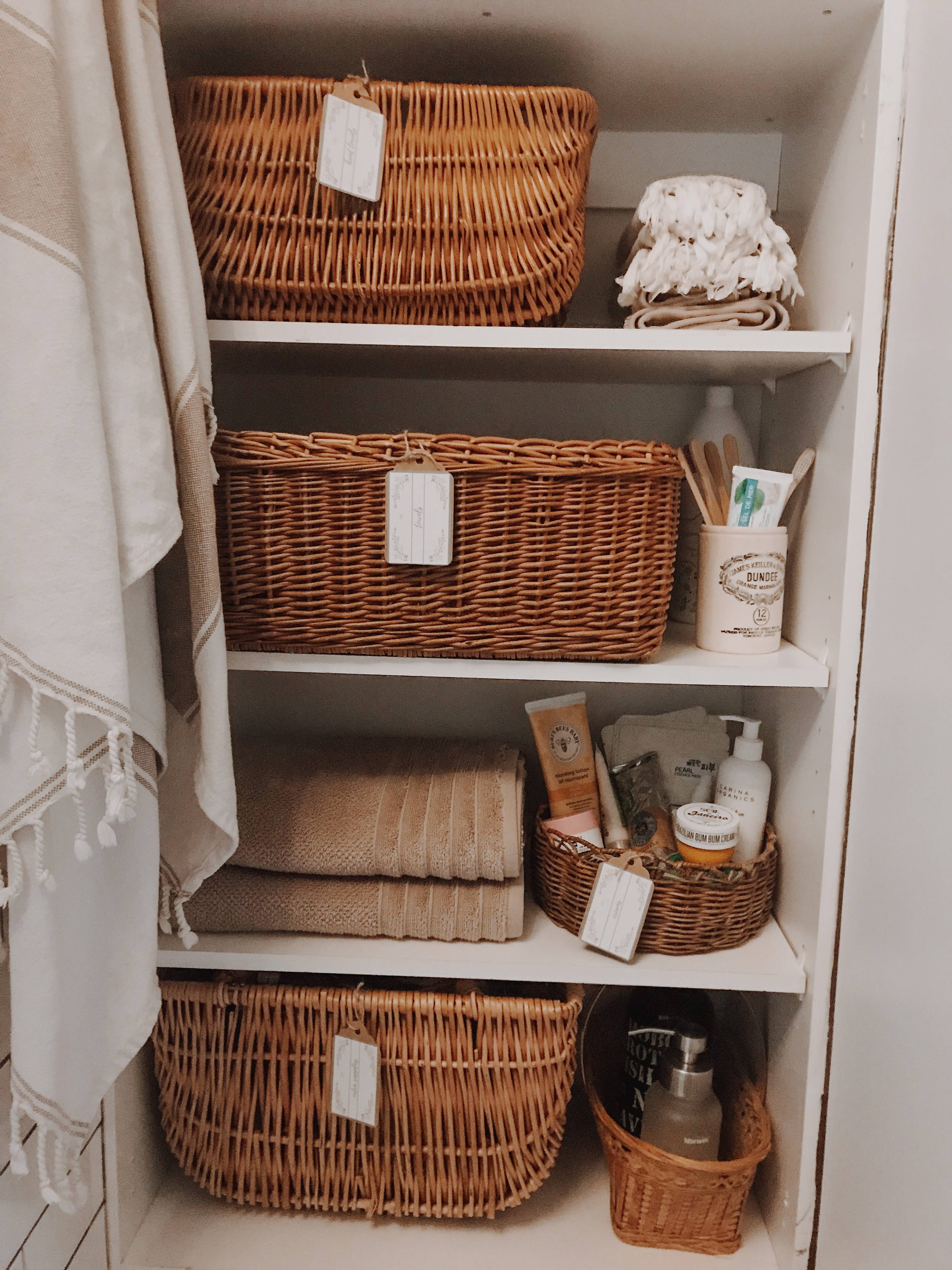 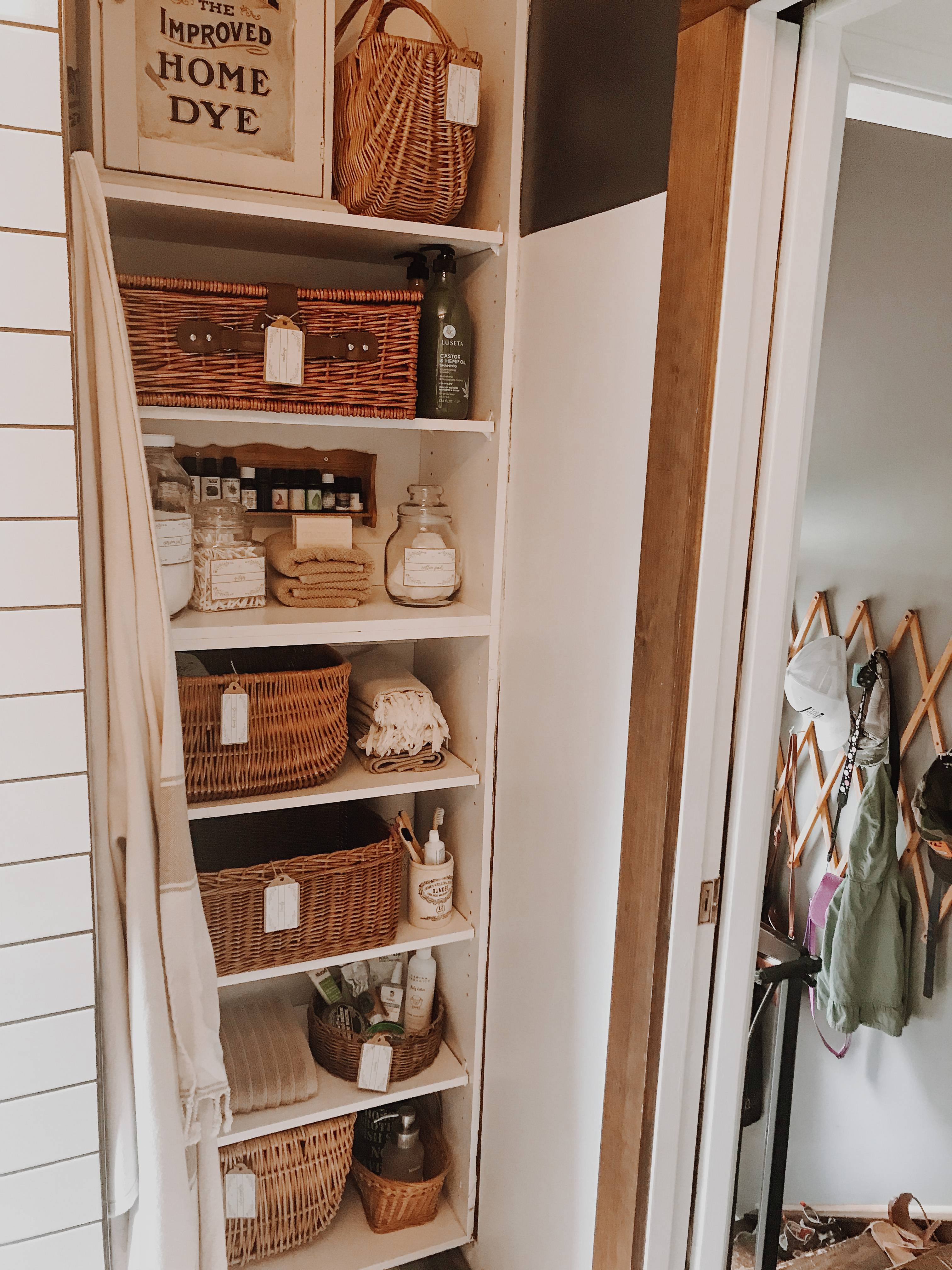 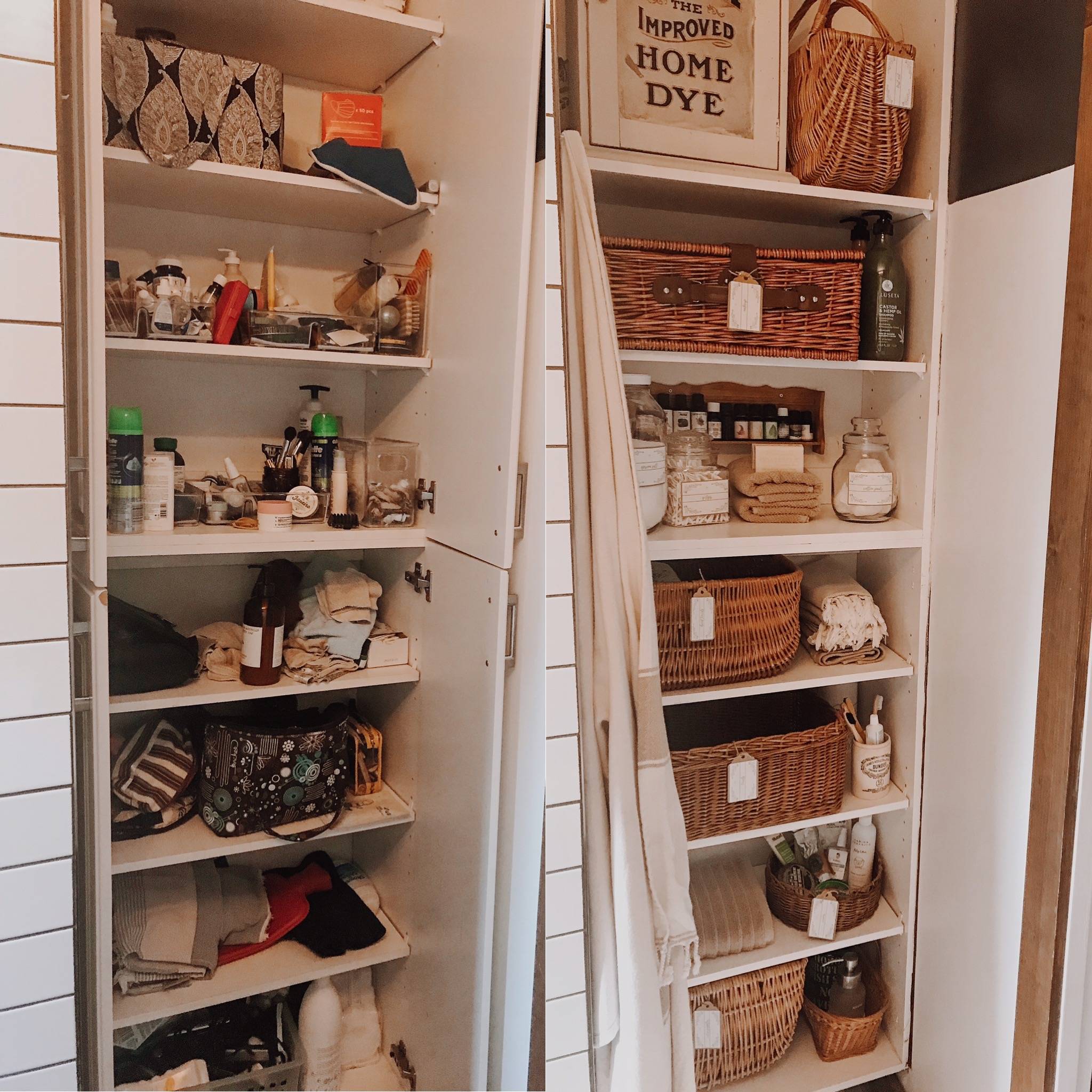 Feel free to print and use the labels I created HERE. 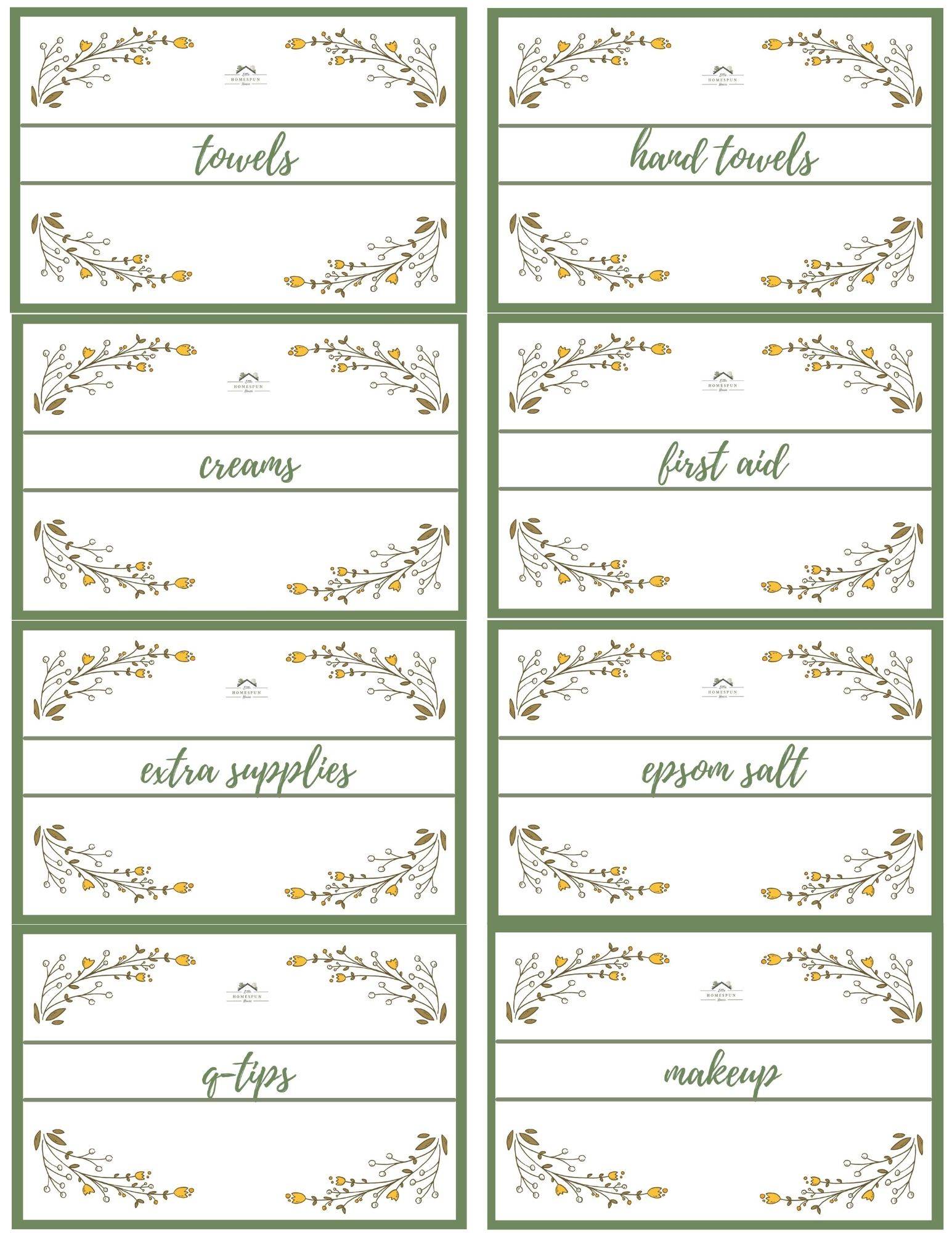 And you can shop similar items for bathroom storage here. 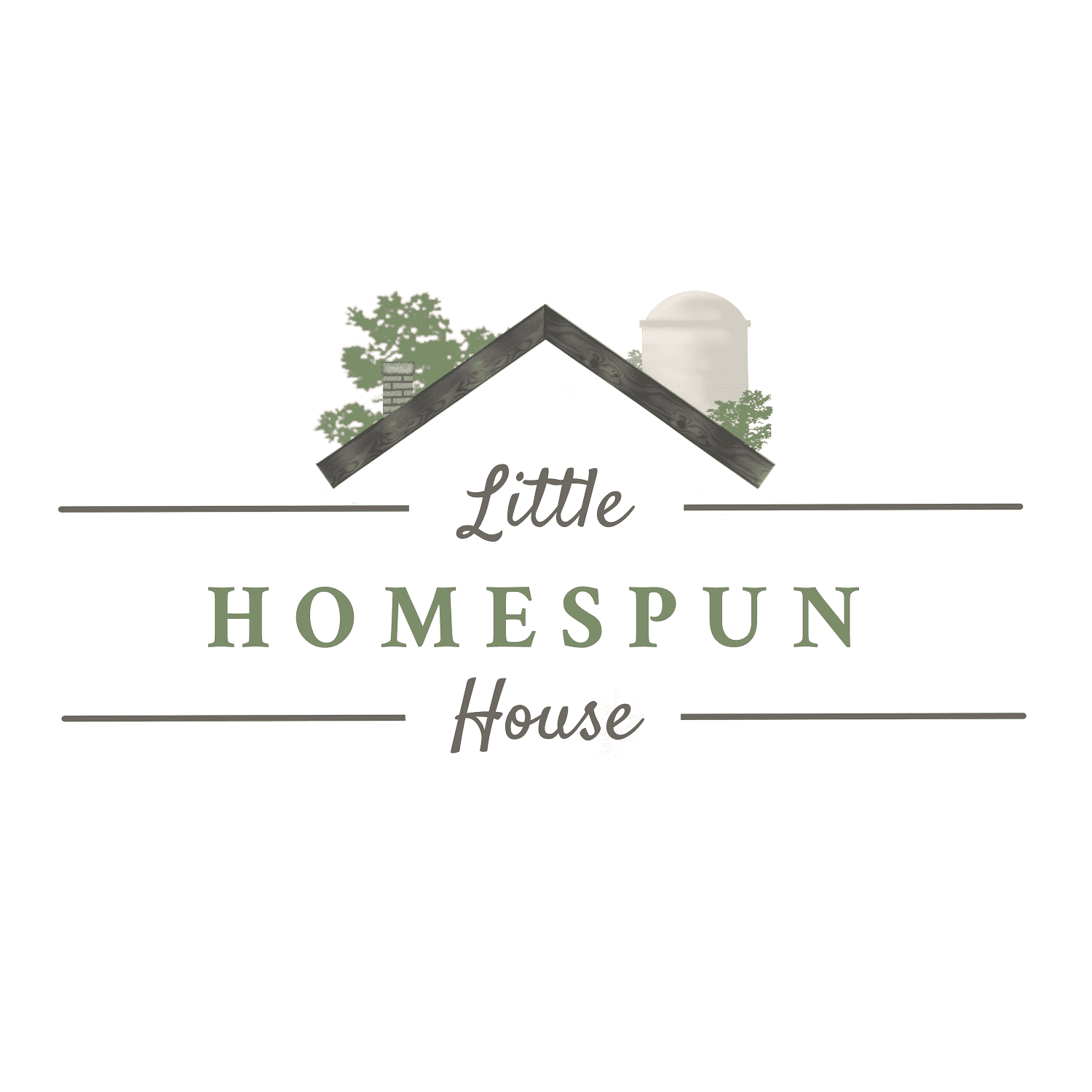 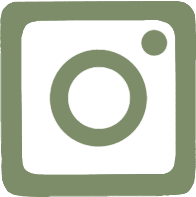 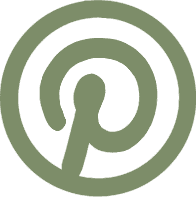